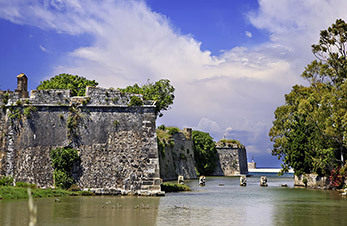 The island has a rich history and many archaeological, historical and religious sites.
The Venetian Castle of Santa Maura, the equally famous church of Santa Maura, the protector of the island, dominates at the entrance of the island. One of the most impressive medieval buildings in Greece, built around 1300 ad. The ancient city of Lefkada (Nirikos) discovered in Kalligoni in Koulmos was the first capital of the island and dates back to the 7th bc century.

The temple of the Pantocrator, located right in the heart of the city. Behind the altar is the grave of the national poet Aristotelis Valaoritis.The cape of Sappho, the southernmost tip of the island. From the white cliffs and the cape, awe-inspiring, the myth wants the poet Sappho gave an end to the life because of love.

The Venetian olive grove, "hugging" the west side of Lefkada town. It consists of centenarian olive trees, which were planted under pressure of conquerors Venetians in the 17th century, and has dozens of picturesque streets offered for walking on foot or bicycle. The waterfalls Dimosari. Follow the shady path under the trees, and find the water falls with force into a blue lake. Located west of Nidri, on the east coast of Lefkada, with its source near the village Platystoma.